For the past five years, Tara Raghuveer, Founder and Director of the Kansas City Eviction Project, has researched housing and evictions across the country, but more specifically in Kansas City. At a recent Donor-to-Donor, Greater Kansas City Community Foundation donors were invited to attend a presentation of Tara’s findings on the local housing and eviction crisis taking place in the metro area.

A Kansas City native and graduate of Shawnee Mission East, Tara attended Harvard University where she studied sociology and urban policy. Tara’s interest in housing and evictions sparked in college, when she interned on the economic development team for the former Mayor of New York City Michael Bloomberg. She noticed integrated public housing in neighborhoods across New York City, but knew that most other cities in the U.S. have little-to-no public housing and most low-income people rent in the private market. 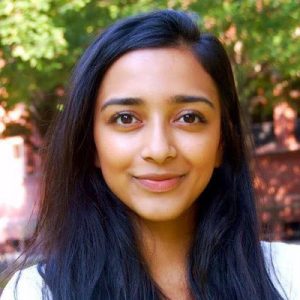 The research Tara presented is considered one of the richest data sets on evictions in the country, and is cited in the Pulitzer Prize-winning book, Evicted: Poverty and Profit in the American City, by Matthew Desmond. The information is composed of ethnographic research, tenant and landlord interviews, court observations, quantitative analysis and mapping, and mainly focuses on Jackson County, Mo. For Tara, this project is considered life-changing in more ways than one.

“I grew up in Kansas City, but I lived in a part of town where I was surrounded by enormous privilege and had enormous privilege myself,” she said. “When I started my research, I found myself building relationships with poor folks and people of color living just 10 minutes away from my parents’ house, but seemingly in a different reality entirely. That shook me to my core; it changed the course of my life.”

In Kansas City, formal evictions are processed through the county. Typically, the landlord will file an eviction, post a summons notice, and then both the landlord and the tenant will arrive at landlord-tenant dockets in county court where a judgment is made. Tara’s research found that of the 6,952 eviction cases heard in 2017 in Jackson County, there were only 18 in which the tenant won.

When it comes to eviction, Tara says Kansas City is considered neither the worst nor the best in the country. From what she’s discovered, the local eviction problem looks similar to that of cities like Milwaukee, Cleveland, St. Louis and Denver. Tara explained that she has yet to come across a city that is doing “particularly well” in terms of finding a solution, but she believes this means Kansas City has an opportunity to lead the country towards change.

“I’m extremely hopeful about my hometown,” she said. “I really believe that Kansas City can lead the nation, but it’s on us to make sure that we work towards a solution sooner rather than later.”

Are you wanting to support organizations working to improve the housing and eviction crisis in your community? A donor-advised fund can serve as the perfect vehicle for giving.  The Community Foundation helps donors maximize their charitable giving through donor-advised funds so they can support their communities and give to causes that mean the most to them. Learn more about donor-advised funds or contact us at info@growyourgiving.org.