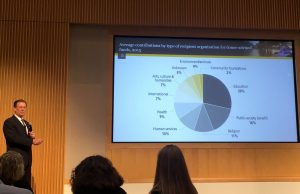 Charitable giving in the United States continues to rise. Last year broke a record with more than $410 billion donated to charities across the country. As a part of Nonprofit Connect‘s 501(c) Success National Speaker Series, Dr. Patrick Rooney from Indiana University’s Lilly Family School of Philanthropy presented the Giving USA Annual Report of Philanthropy for the Year 2017.

Giving USA is the largest and longest-running data set on philanthropy in the United States. The report found that in the last six years, giving by foundations has reached a new high, increasing by 6 percent from 2016. In his presentation, Dr. Rooney covered rates of change in giving, contributions by source and recipient type, economic trends in giving and trends in total giving.

Dr. Rooney also spoke on the recent changes in tax policy and how the changes might affect giving in years to come. The Tax Cuts and Jobs Act that was signed at the end of 2017 implemented several changes to both corporate and personal tax laws. Dr. Rooney said because of the new tax law, donor-advised funds are experiencing “rapid growth” and predicts that many will turn to a tax strategy called bunching, paired with donor-advised funds. Bunching allows donors to continue supporting their favorite charities, while still retaining the tax benefits by contributing multiple years’ worth of donations to a donor-advised fund in a single calendar year.

Do you want to contribute to next year’s record-breaking numbers? Consider establishing a donor-advised fund to maximize and organize your charitable giving. Contact us at info@growyourgiving.org or 816.842.0944 with any questions.