Many years ago, Gene Balloun and his wife Sheila became foster parents and entered the world of foster care and adoption. Gene, a lawyer by trade, often served as a wealth of knowledge about the legal aspects of adoption for other foster and adoptive parents. Gene began conducting pro bono public adoption cases through his employer, Kansas City-based firm Shook Hardy & Bacon. However, that tremendous service still wasn’t enough for Gene and the firm. 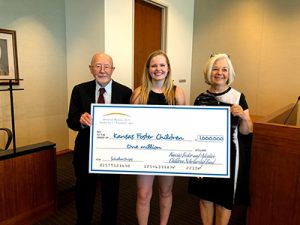 Through each adoption case, although not collecting any payment from individuals, Gene received compensation from the state government. Gene and Sheila, together with Shook Hardy & Bacon, decided to put those dollars back in the hands of the kids and families they were serving by establishing the Kansas Foster and Adoptive Children Scholarship Fund in 2001, donating Gene’s compensation from the state to grow the Fund.

Listen to their conversation on the Grow Your Giving podcast, available online, in the iTunes Store, and on Google Play Music.

Find all episodes of the Grow Your Giving podcast at growyourgiving.org/podcast.