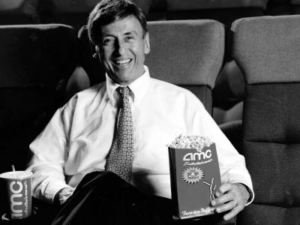 What started as a family-owned theater business in downtown Kansas City quickly evolved into a concept that would change the film and entertainment industry forever.

Upon completion of his Harvard education and service in World War II, Stanley Durwood returned to his hometown of Kansas City to join his family’s theater business.

After witnessing sales dwindling, Durwood thought he could boost business by showing multiple films under one roof. He knew this concept would appeal to movie-goers who wanted to choose from a selection of films available. In 1963, Durwood opened the country’s first-ever multiplex movie theater in Kansas City.

Durwood changed the name of his family-owned business to American Multi-Cinema, or AMC Entertainment as it’s known today. As CEO of the nation’s first multiplex movie theater company, Durwood’s innovation and leadership led AMC to its position today as the largest theater chain in the world.

Durwood’s success led to the founding of the Stanley H. Durwood Foundation, which was established upon his death in 1999.

Durwood named two of his closest friends and colleagues as co-trustees of the Fund. Charlie Egan, a fellow Harvard alum and member of the AMC Board of Directors, and Ray Beagle who served as AMC’s corporate counsel.

Ray and Charlie met with the Community Foundation to discuss the future of the Durwood Foundation. After an eye-opening visit to Operation Breakthrough, an organization in Kansas City that cares for underserved children, the Community Foundation’s expertise helped the trustees determine they would focus their funding on quality and accessible early childhood education. Today, the Durwood Foundation continues to fund high-quality programs and focuses on increasing the accessibility of these programs for low-income families and families of color.

After the passing of Ray Beagle in 2016, Charlie Egan appointed two additional trustees to the Durwood Foundation. Dwight Arn and Deanne Stedem join Charlie in visiting facilities around the metro area and together the trustees make decisions about grantmaking.

For some, the Durwood Foundation has funded salaries, enabling organizations to grow and serve more populations. For others, support has meant the ability to retrofit restrooms, allowing them to finally open additional classrooms for children.

“Our relationship with the Durwood Foundation is based primarily around a project that will provide a new and better facility for the Lee Ann Britain Infant Development Center,” shared Laurie McCormack, Executive Director of the AdventHealth Foundation. “The new, state-of-the-art B.E. Smith Family Center will house both the Britain Infant Development Center for children with developmental disabilities and the Early Learning Center, the on-site daycare facility for children of AdventHealth Shawnee Mission employees. The new facility will center around a peer-based program and offers cutting-edge technology to better serve all children.”

“The Durwood Foundation was one of our earliest funders,” said Beth. “With the help of the Durwood Foundation, we’re able to better market our programs to potential applicants and provide scholarships to adults returning to school to become early childhood educators themselves.”

Nodding their heads in collective understanding when others spoke of challenges and success, attendees shared the impact their programs have on the community with the support of the Durwood Foundation.

At the center of all things early childhood education, the Durwood Foundation trustees see themselves not only as grantmakers but also as networkers and connectors.

“The Durwood Foundation has done a lot to build up organizations individually and collectively as they all have the same goal at the end of the day: to better serve our community’s young children,” said Whitney Hosty, Senior Philanthropic Advisor at the Community Foundation. “When the trustees see a need not being met in one program, they often know someone from another program in the community who can meet that need or provide insight and knowledge. This impactful community of people and programs are all better because of the Durwood Foundation’s support.”

Learn more about how we can help you give back or contact us for more information.